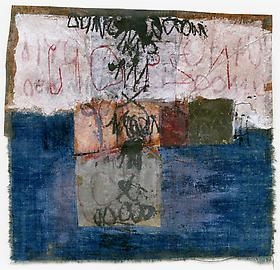 "Between the late 1960s and '80s, when American artists were making big Minimalist and Neoexpressionist statements, Hannelore Baron stood out for her modest-size works, notable for their quiet, emotional power, and anachronistic charm. But Baron, who died at the age of 61 in 1987, had always kept herself apart form the art world, producing small-scale works that appear fraught with a tortured personal history.

"The 23 box constructions and collages on view here recalled such masters of assemblage as Rauschenberg, Cornell, and Schwitters. In individual works (all untitled and dating from the mid-1970s to the mid-'80s), surfaces are scratched and incised with incomprehensible ciphers; pieces of worn fabric form a backdrop for cartoonish animals; reliquary-like boxes are held together with metal bindings; and some objects appear to have been lightly blasted with a blowtorch. As in Cornell's boxes, we sense an obsessive need to convey a hermetic language of highly intimate fantasies and nightmares.

"Of the latter, Baron surely had plenty. She saw her father beaten and her home destroyed on Kristallnacht in 1938, three years before her family escaped to America; she suffered severe claustrophobia and three nervous breakdowns as an adult; she gave up parts of her body during a 14-year struggle with cancer. There are abundant hints of autobiography and arcane symbolism. In a show a the Neuberger Museum of Art a decade ago, wall text claimed that Baron inserted birds in her collages to remind us of a fragile ecology, and she wrapped materials to evoke both winding sheets and swaddling clothes. But taking away anything we might know of her biography and intentions, these works continue to enchant by virtue of their rawness and urgency." — Ann Landi