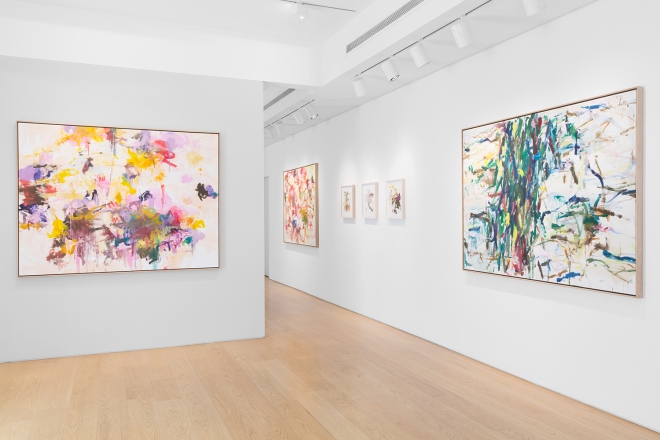 “It’s hard to resist seeing an artist’s final works as a summing up,” writes the critic and curator Karen Wilkin, “if not of everything that came before them, then, at least, of his preoccupations over his last few years.” Wilkin’s thoughtful essay accompanies “The Final Years,” a new exhibit of paintings by Kikuo Saito (1939–2016), the Japanese-born painter, set designer, and theater director who died this past February.

The exhibition, now on view at Leslie Feely Fine Art in New York, features paintings completed in 2015 and 2014, not long before Saito’s death following a long, fruitful career. These recent paintings “seem new in many ways, more intense, perhaps more fluid,” Wilkin says, though they also feel like “triumphant summations of decades of exploration.”

Indeed, the abstract paintings are exciting and alive, rich with saturated colors. Their forms slash across the canvas, with paint dripping languorously off the surface and bleeding off its edges. In some, thick brushstrokes are scrawled across the canvas, suggesting familiar organic forms or indecipherable letters.

The works represent the final stage in an impressive creative trajectory. Born in Tokyo, Saito moved to New York in 1966. Before leaving Japan, he designed stage sets for modern-dance performances, a field he continued to pursue in the U.S. and, later, in Italy and France. Drawing on Kabuki tradition, his innovative sets incorporated water and other unconventional material.

At the same time, Saito was kicking off a career as a painter. In the 1970s and ’80s, he served as studio assistant for a handful of legendary painters, including Larry Poons and Helen Frankenthaler. Eventually, Saito abandoned his theater work to focus on developing his particular style ofColor Field abstraction, often featuring calligraphic characters drawn from an alphabet of his own creation.

That love of written language and natural flair for the theater—the sensuality and shape of a costume, the whirling colors of dancers in motion—come across in his paintings. It was also reflected in his technique of painting on the floor, circling over the canvas with his own body. These last works are rhythmic and vibrant, energetic, even musical—ultimate expressions of a colorful life and career that spanned genres and hemispheres.