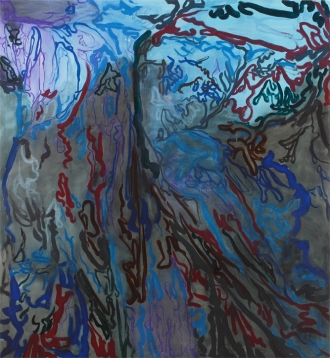 Normally, there’s a visually obvious distinction between figurative and abstract paintings. John Constable shows English landscapes, while Jackson Pollock’s large late-1940s abstractions depict nothing real. But it’s generally difficult to identify the subjects of Liliane Tomasko’s paintings. Thus, this exhibition is surprisingly puzzling. Most of Tomasko’s larger oil-on-linen paintings, all made in 2014, present fields of lines on intense dark, Nordic-colored backgrounds—“Night Shifting,” and “Ludlow Dream” are examples. But one picture, “Linens,”has intense blue, violet, and yellow lines on a white ground. In “The Bed” we see the dim image of a man sprawled on a bed. And the title of “Linens” certainly clues us into how to read what initially looks like a purely abstract pattern. Identifying the subjects of all of these pictures, however, only becomes possible when we learn how they were made: Tomasko paints from Polaroid photographs of ordinary fabrics, bed sheets and linens, curtains and clothes, transforming these objects into something almost unrecognizable. She takes us “into the darkness”—into the world of bedtime dreaming. Twenty-five small works—either watercolor on paper or oil on canvas paper—were installed in a dense hanging on one wall. A few, such as “Map. June 12, 2014”, are identified as maps with dates of their creation; the titles of most, however, contain the phrase “Everything. In its right place,” which is written out in one painting “Everything. In its right place #7, 2014.” In these very varied works on paper we are brought close to Tomasko’s processes of picture-making. Some, like “Everything. In its right place #30,” look like small Abstract Expressionist paintings. Others, like “Map. June 21, 2014,” are small versions of her larger pictures. If we are patient, we really do see every thing in her visual world, for every way of mark-making that she employs is mapped out, set in its right place. A few years ago Tomasko made paintings showing recognizable beds. Her new pictures look abstract in part because now she takes us close up to her subjects. In fact, the apparent abstraction of Tomasko’s paintings bears witness to the enchanting complexity of her pictorial subjects. Look closely and attentively at banal fabrics nearby, she shows us, and you will find how much there is to see right at hand.

Sometimes when an exhibition is puzzling, it is good to look nearby for inspiration, outside of the show itself. Two blocks north of Leslie Feely, so it happens, there is an exhibition at the Frick that includes Jean-Antoine Watteau’s “Fêtes Vénitiennes” (1718 – 19), on loan from the Scottish National Gallery, Edinburgh. Look closely at that Franco-Flemish painter’s fabrics and you will find an uncanny anticipation of Tomasko’s concerns. Like her, Watteau loves the patterns created by the folding of colored fabrics. His fabrics are suggestive because they reveal or veil the bodies of the elegant men and women he depicts. In Tomasko’s much larger paintings we are taken close up to textiles. Her subjects thus become the pretext for seemingly abstract pictures, images that, because they exist as if at the margins of ordinary perception, are hard to recognize. In our culture where photographic images are omnipresent, only figurative paintings that take risks like hers stand a chance of having an impact.

My analysis is indebted to Anne Hollander’s classic Fabric of Vision: Dress and Drapery in Painting (Yale University Press, 2002).