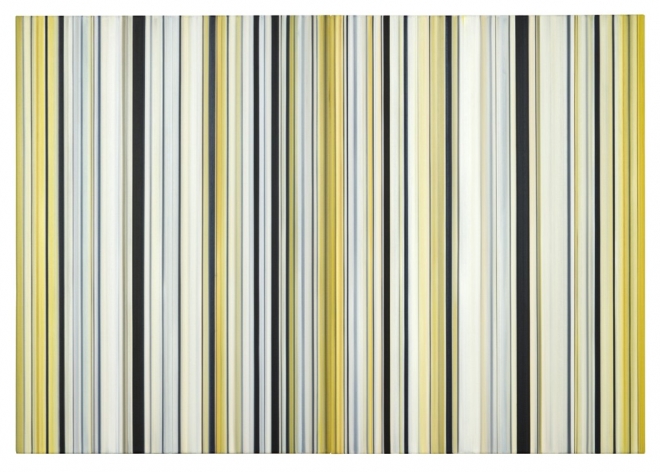 When you hear the word “brushstroke,” you probably think of color and texture, of paint applied to canvas in gestural motions. But “Strokes,” a new exhibition at Leslie Feely in New York, defies that expectation.

Cornelia Thomsen’s latest body of work is elegant, almost geometric. Much of her new work features a series of vertical stripes in flat, opaque hues of black, gray, yellow, white, and blue. As the art critic and curator Robert C. Morgan writes in an essay accompanying the exhibition, it’s a style she has been developing for years: “Her artistry—whether on canvas or paper—represents a subtle compilation of experience as carried forth over a significant period of time, her structural tenacity holding her various compositions intact.”

Line, space, and color are crucial to understanding her practice. The densely packed lines are straight and vertical, imposingly so in the handful of 7-foot-tall canvases. Some lines are thick; others, thin. Some have sharply defined edges, while others are blurry. There’s space between them, often at irregular intervals. And the color, particularly in her recent works, is subdued, with a keen focus on the contrast between dark and light.

Given those contrasts and rhythmic alternations, there’s a certain musicality to Thomsen’s work. Morgan, for his part, compares the paintings to the structured figurations in Bach’s Goldberg Variations, saying her work can be seen as “a sequencing of tempos.”

Perhaps, then, the titular strokes aren’t just from a brush. Perhaps they’re strokes of a key like those a musician would play in a shimmering melody.