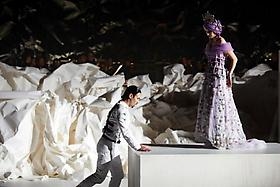 Performed with the Los Angeles Philharmonic, Mozart’s Don Giovanni shares the tale of a promiscuous nobleman and his eventual downfall to the throngs of Hell for his wrongdoings. Frank Gehry, who, in 2003, designed the Disney Concert Hall where Don Giovanni is being shown, was asked to construct the opera set which is paired with the costume design of sisters Kate and Laura Mulleavy of Rodarte.

In typical Gehry fashion, the set design includes an intensely layered backdrop of organically crumbled paper. The abstract sculptural forms – which can be interpreted as anything from icy waves to the bedsheets of his sexual conquests – create a neutral textured setting which make Rodarte’s colorfully detailed costumes pop. More about the set design after the break.

According to The Architect’s Newspaper, construction and maintenance of the mountains of paper posed a challenge for the design team. Supported by wooden frames, Gehry’s team scrunched over 80 rolls of nine-foot wide to make the mounds, yet Gehry explained that the executed set ”did not look like the model at all.” Plus, close to 20% of the paper must be repaired after each performance due to the performers’ interacted with them

Calling the set a “moving still-life on the stage”, Gehry designed tiered moveable platforms to occupy the center of the stage. The performers exploited the potential of the design to balance a duet occuring on the stage floor with movement above on the platforms.

Gehry also modified the placement of the orchestra, moving the musicians to the back of the stage and raised on lifts approximately three and a half feet above the action taking place downstage. The layout aims to create a unified ensemble between the orchestra and soloists, and creates an intimacy between the soloists and audience by bringing the viewers closer to the stage.

Don Giovanni is one of three operas written between librettist Lorenzo da Ponte and composer Wolfgang Amadeus Mozart. Over the next three years, the LA Philharmonic will present the remaining two operas (one per season) and pair with new architects. Jean Nouvel will design the set for The Marriage of Figaro next year, and Zaha Hadid will design for Cosi Fan Tutte in 2014.