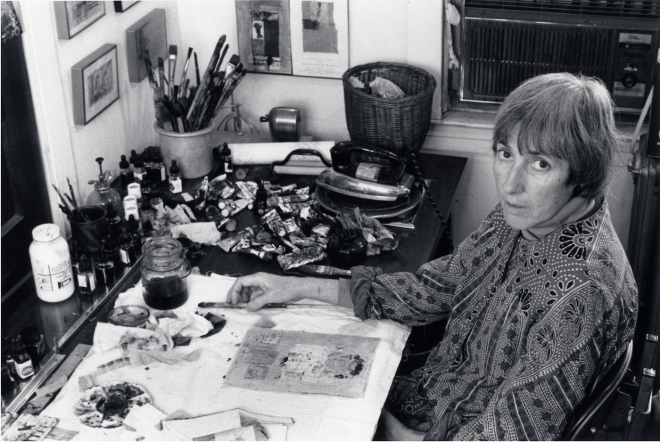 Can art born of unspeakable horrors express something other than the soul-scarring pain and trauma that forever mark its creator?

The art of Hannelore Baron (1926–1987) never explicitly poses this question; it is never overtly therapeutic or political, although, for its maker, it was always inescapably both. Still, it answers that query with a positive declaration of humanity as fulsome and knowing as the resonant “Yes.” Molly Bloom pronounces decisively at the end of James Joyce’s grand, psyche-probing Ulysses.

For those who are unfamiliar with Baron’s work, a well-chosen selection of her mixed-media collages and box assemblages is now on view at Leslie Feely Gallery on Manhattan’s Upper East Side. The exhibition offers a memorable opportunity to get to know an unusual oeuvre, which was admired by close followers and connoisseurs during Baron’s lifetime but still deserves more critical attention from curators and historians today.

Baron was born Hannelore Alexander to Jewish parents in Dillingen, a town in the Saarland region of southwestern Germany. With the rise of the Nazis, her father, Julius, who sold fabrics for traditional, embroidered tablecloths and household linens, was forced to close his shop and become a door-to-door salesman. In other ways, too, the Alexanders felt the heat of Germany’s changing political climate after Adolf Hitler came to power in 1933.

In November 1938 came the terror of Kristallnacht (“Night of Broken Glass”), when Nazi paramilitary groups and other civilians conducted a nationwide pogrom, attacking synagogues and Jewish-owned stores and properties, and ransacking the homes of Jewish families, often injuring or even killing their occupants. During Kristallnacht in Dillingen, local townsmen, including some whose faces the Alexanders recognized, raided their home; they beat Hannelore’s father with a hammer, and policemen later hauled him away for his own “protection.” Eventually, he ended up in Dachau. Hannelore would never forget that harrowing night or the following morning, when she, her younger brother and their mother returned to their devastated apartment, and Hannelore saw her father’s bloody handprint on the living room wall.

In time, the Alexanders managed to send their children to stay with an aunt. After bouncing around France and Luxembourg, the youngsters were reunited with their parents, and after journeying through Europe, the family set sail from Portugal and arrived in New York in June 1941. The Alexanders settled in the Bronx, and Hannelore enrolled at Straubenmuller Textile High School in downtown Manhattan, where she studied fashion illustration, even though she had no interest in the subject.

As a young woman, Baron read extensively about Asian history and philosophy (she kept a detailed reading journal), including such books as The Teachings of Confuciusand the Chinese Nationalist leader Chiang Kai-shek’s speeches. She made representational drawings in pencil on paper and oil paintings on canvas board, and with casein on paper, landscapes in an abstract mode. She took a job at a Manhattan department store, only to discover that she had debilitating claustrophobia, which prevented her from riding in elevators or venturing far from home. About four years after arriving in the United States, Baron suffered her first nervous breakdown. Years later, she recalled, her uncle, a doctor in the Bronx, “gave me some sedatives, even took me to some psychiatrists, bought me two dresses and told me above all to keep my state of mind an absolute secret from the outside world.”

Baron recognized that her condition was a reaction to the traumatic events she had experienced during her childhood and a hindrance to her ability to interact socially with ease. Still, in 1950, she married Herman Baron, a Yonkers-born, Jewish bookseller whom she had met while sketching in Van Cortland Park, in the Bronx. On the day of that first encounter, for openers, they had chatted about the Impressionists. Later they had two children, including a son, Mark.

Mark Baron formerly operated Baron-Boisanté Gallery in Manhattan with his wife, Elise Boisanté. Today they work as private dealers, and Mark oversees his late mother’s estate. Known for his attention to detail, which, in recent years, he has brought to his and Boisanté’s collecting and handling of rare, Hindu-deity prints from India, Mark has assembled a trove of documents and photographs that provide a record of his mother’s life and art-making career. “She began showing her work in local group shows in the early 1950s,” he recently told me, “and was in her forties when she started making collages. For many years, until my parents moved into a house of their own, where she finally had a small studio, she worked at the kitchen table. I knew about her past, and it was clear to me that she was making her art for herself, for some therapeutic purpose, but she never really spoke about it in such terms.”

What she did discuss with her son was what she called “the message,” or what she regarded as a need to feel empathy toward others, a concern that became an abiding, if subtle, theme of her art. As someone who had witnessed unimaginable brutality and cruelty as a child, Mark Baron told me, his mother had grown up to possess an open mind and generous spirit. She rejected nationalism and war, and realized that human history was littered with the psychic-spiritual wreckage of numerous holocausts — and that such horrors were still playing out in her own time in such places as Vietnam, the Middle East and Africa. In a 1981 conversation with her son, an unpublished transcript of which Mark Baron made available to me, the artist said, “[It] is what I’ve found out through my own life about the human condition and so on. […] It’s like I understand what’s on the bottom of it all now and I truly believe there is a big difference between knowing everything superficially, reading about it in books, or having figured it out for yourself.”

To make her collages, Baron used scraps of fabric, thread, paper, ink, watercolor and chalk. She also cut thin sheets of copper into the shapes of birds, human figures or other subjects, inked both sides of her cutouts and used a small etching press to print them onto materials she would later bring into her collage compositions. In them, stripes often allude to torn flags and the artist’s loathing of nationalism. Her use of string, she once noted, was “mostly for texture.”

In her 1981 discussion with her son, she observed, “I was always interested in Egyptian mummies […] but later on, during the Vietnam War, when I saw all these bodies in plastic bags […] then I thought of that whole thing too. […] The string does have to do with imprisonment. […] I am very concerned about the political prisoners all over the world, and of course it had to do with my own past experiences, where I was not tied up, but it does not mean literally, physically tied up. [Y]ou can be in prison without being in a locked room. You are imprisoned by your own fears, inhibitions, phobias.

Mark Baron told me, “Ironically, it was when my mother was feeling better, more able to cope, that she made what might be described as her darker-feeling works, and when she was going through periods of deep depression —sometimes she felt suicidal — she made some of her brightest, most positive-feeling pieces.”

The works on view at Leslie Feely date from the mid-1970s to just before the artist’s death and include some of Baron’s most wistful, emblematic essays in texture, color and form. The exhibition features such pieces as “Collage” (1976), with its central, dark-pink section and typically tidy stitching-together of mostly rectangular fabric components; “Untitled” (1985), a patchwork of off-white blocks topped off by a single black diamond (which Mark Baron cut from a larger, patterned piece of cloth; his mother did not feel capable of “violating” it herself); and “Untitled” (1983), with its scratchy, primordial markings and brown outline of a slender human form. Daubed with splotches of color, and vaguely alphabetic “writing” and irregular lines made by rubbing onto an ink-covered sheet placed against their surfaces, many of Baron’s collage works resemble palimpsests.

The exhibition also includes several mixed-media box assemblages, which contain pieces of painted, textured wood, fabric or wire, and exude the air of mysterious artifacts from some unknown age. To some degree, Baron’s boxes share affinities with those of the Ohio-based, elderly American maker of box-assemblage works, La Wilson, who has long been a student of Buddhist thought and whose works transform ordinary objects, such as clothespins or thread spools, with a sense of magic, gentle humor and heightened awareness. But the soulfulness of Baron’s creations is much more visceral than cerebral. Her box assemblages are not wrapped — or trapped — in the air of poetic-romantic longing that clings to those of Joseph Cornell.

At one point in her life, Baron sought and eventually received financial reparations for the trauma she had suffered during the Nazi era. In a 1957 letter to the postwar government of West Germany, her uncle, the doctor, wrote, “Mrs. Baron always mentions as a cause for her sickness the terrible night [in November] 1938, when the Nazis broke into [her family’s] apartment, and the Nazis mistreated her parents and ruined their living quarters.” In one of her own written statements about her condition, she referred to her “anxiety, sleeplessness, heart pounding,” her “constriction in the throat (a feeling of suffocation),” and the fact that she was “always very worried, even concerning minor things.” Years later she was diagnosed with cancer, the disease that ultimately took her life.

Despite her condition — she regularly saw psychiatrists and suffered more nervous breakdowns — Baron managed to show her work in group and solo exhibitions, including at Manhattan galleries. As a volunteer, she taught an arts-and-crafts class for children at a Jewish community center in Yonkers, where she had access to woodworking tools and first began using them to make assemblage sculptures.

The artist told her son in their 1981 conversation, “Everything I’ve done is a statement on the, as they say, ‘human condition’….” She referred to 1960s civil-rights marchers, anti-war protesters “who set themselves on fire,” and even would-be assassins, noting that at various times she had been able to share their feelings but that, ultimately, she always had been able to find her “way out” and “to make the protest through my artwork, hoping that it [would] reach the same ends.”

Deeply aware of the ways in which her mental-health condition had hindered her, she observed that she had “always been stuck” thanks to her “own fears.” She said, “I always think that if I let go and go into the large outer space, I won’t find my way back. […] It’s just fear of the unknown…and I don’t know if I could come back…. I have fear of the unknown in general, whereas other people want to go out and explore the unknown.”

Hannelore Baron did not venture much out into the world, even hesitating to attend her own exhibitions’ openings. But through her art, whose peculiar character evokes a sense of contemplation and uncertain emotion, she dared to dive deeply into some of the darkest, most conflicted regions of the soul, returning with creations whose spirit whispers, across the decades, a message of survival, endurance and hopefulness in enigmatic billets-doux to humanity.