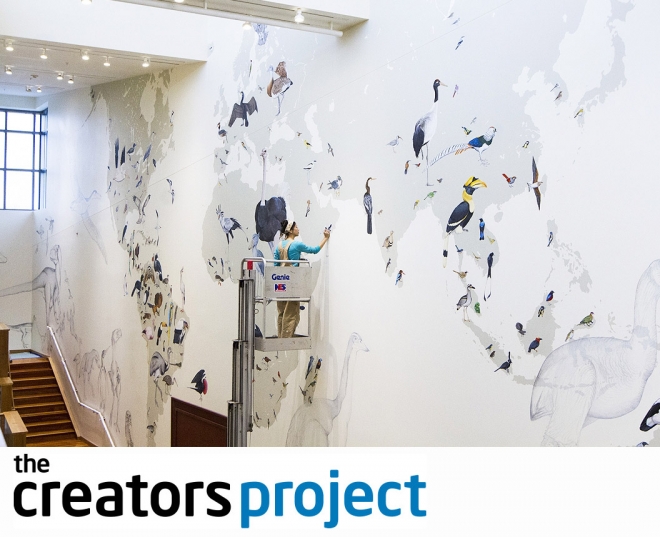 Tonight in Ithaca, New York, an unparalleled illustration takes flight. At 7:30 PM EST, artist Jane Kim will unveil The Marriage of Art and Science: A One-of-a-Kind Mural of Birds, the "only mural in the world depicting all 243 families of modern birds (and 28 dinosaurs and pre-pre-pre-historic beasts) in one place" at the Cornell Lab of Ornithology. Spanning 375,000,000 years of avian evolution, the 70' x 40' mural took Kim two-and-a-half years to make, requiring theInk Dwell founder paint a mind-bending entire bird per day. Scientific illustration is already one of the most difficult artforms, requiring years of practice to hone—not to mention putting a bird on it is no cakewalk—so the fact that each bird is drawn to scale, from the miniscule marvellous spatuletail hummingbird, to the 30' Yutyrannus ("feathered tyrant") dinosaur, makes it all the more impressive.

Alongside specially-commissioned works by Maya Lin and James Prosek, the mural debuts tonight to celebrate the centennial anniversary of the Cornell Lab of Ornithology. You can check out images of the mural below, and watch the official unveiling tonight at 7:30 by following the livestream here.