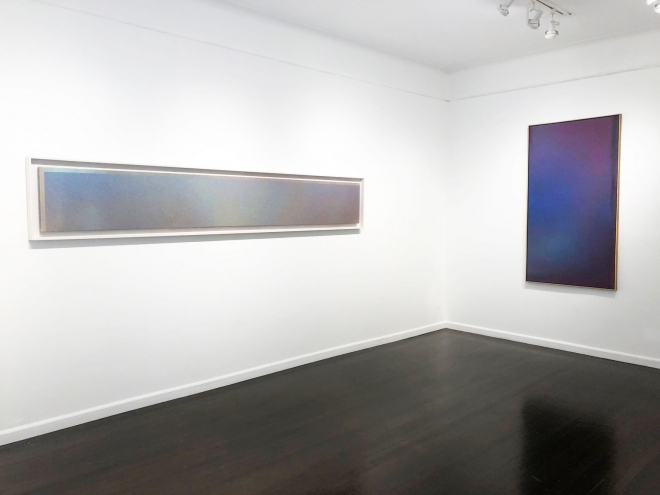 For some reason, the top color-field painters of the 1960s (and even a little bit later) seem to be “in” this season in the Manhattan art world, or at least accepted as members in good standing of the ‘60s crowd (as opposed to being ostracized because Clement Greenberg admired them, and although few if indeed any of the younger artists most directly descended from them are deriving the slightest benefit from this new climate).

I say this not only because of the many solo shows I’ve so far reviewed this fall, nor even because of the exquisite mini-show of “Jules Olitski: 60’s Sprays”currently at Leslie Feely but most of all because of three group shows that include some of the artists I most admire and have been or will be mounted in unfamiliar big-league venues.

In this category I would first place “The Joy of Color” at Mnuchin on East 78th Street (closing December 8), second, “Epic Abstraction: Pollock to Herrera,” at The Metropolitan Museum of Art (opening December 17), and “Spilling Over: Painting Color in the 1960s,”at the Whitney Museum of American Art (due in March).

“THE JOY OF COLOR”

On the basis of the first of these, I am not expecting a consistent level of quality from the second or the third. However, there are some good to very good paintings at Mnuchin by Olitski, Frankenthaler, Louis, Noland, Jack Bush & Larry Poons along with amusing if not particularly searing work by Andy Warhol, Jeff Koons, Alexander Calder & Laura Owens.

Other well-known contributors range from de Kooning & Rothko to Alma Thomas & Sam Gilliam, while there is even one participant who was new to me: Nathlie Provosty -- b. 1981 in Ohio, now based in Brooklyn and represented here by “Lode” (2018), a nice, small, mostly yellow panel.

Call me hypercritical but the show I really went ape for was “Jules Olitski 60’s Sprays” at Leslie Feely, even though Feely’s vest-pocket space at 1044 Madison Avenue is filled to overflowing with just five not overly-large paintings (plus a modestly-scaled 1977 Anthony Caro“table piece” on the floor).

The management at Leslie Feely doesn’t go for press releases or checklists, but I was told (and believe) that these near-perfect, smaller sprays are becoming rather hard to find. The artist didn’t make that many in the first place, and most of the ones he did make are now in museums.

This is easy to understand when contemplating their suave, super-subtle gradations of color, often though not always set off by those neat little bands of a contrasting color along the edge or edges of the canvas.

The widest of the paintings on view is “Fourth Hoyo” (1967), a pearly grayish narrow horizontal measuring 16 x 116 inches. The tallest is “Fourth Caliph” (1965), a rich blue looming rectangle that measures 65 x 35 inches.

Officially, this show doesn’t end until January 1, but the gallery may well be closed over the holidays, so if you want to see these paintings, make a point of getting there on or before December 22.