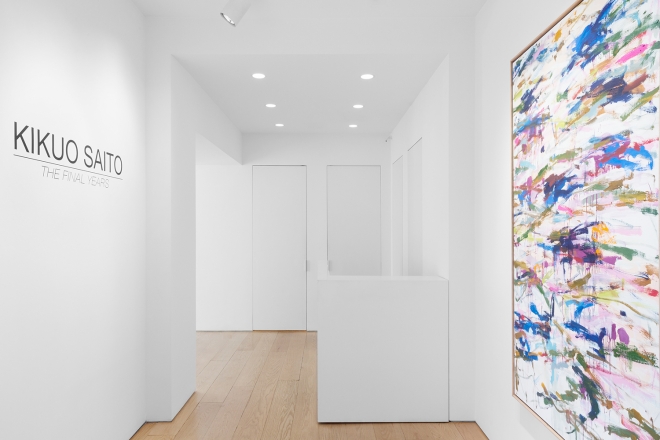 This is not a good year for modernism. But life is short and art is long. Kikuo Saito, who died last February at 76, is being honored by two exhibitions. At Leslie Feely in Manhattan is“Kikuo Saito: “The Final Years” (through October 14) and at Sam & Adele Golden in New Berlin, NY is “Kikuo Saito: Color and Drawing” (through March 24, 2017).

The Manhattan show is the only one I’ve seen, and it’s certainly interesting as an index of Saito’s most recent concerns. These paintings have a lot of white space in them, upon which short, free strokes are clustered, seemingly at random.

In some cases, most of these strokes run horizontally, and are only accented with vertical ones; in other cases, the relationship is reversed. This seems to be a function of how the canvases are hung, as opposed to how they were originally painted.

Some of these canvases have a lot of drips and dribbles. I found most appealing those where the more nuanced strokes dominate and the drips are at a minimum. This is particularly true with “October 11, 2015.”

This large oil on canvas, measuring 6½ x 5½ feet, incorporates many different colors—blacks, blues, reds and greens, with touches of pink and mint underneath. Because of its restraint, it’s light and graceful.

.Another standout is one of the small acrylics on paper, “Drawing #261, 2015.” Only 15.5 x 12 inches,” it’s impishly built around a large, pink sail-like area, accented by two dashes of iron-gray diagonals.

With a larger time frame to choose from, the show at Golden Artists’ Colors is more ambitious and more lavish. I so much regret I’m not going to be able to get there myself, but the catalog is extremely handsome.

Reproduced (in high quality color) are thirteen good-sized acrylics on canvas, all from 1979, 1980 or 2012. During these years, the artist was mostly working with large, clear areas of color, usually interspersed with white areas of canvas and often incorporating whiplash lines.

They make a very impressive presentation.

The catalog is further enhanced by a well-done essay from Jim Walsh, the painter & the gallery’s director. It deftly summarizes Saito's experiences as a Japanese immigrant, studio assistant and theatrical designer, before embarking upon an illuminating discussion of just what Saito found most valuable in using acrylics.

“In the selection of works in ‘Color and Drawing,’” Walsh writes,”Saito can be felt breathing into the paintings his sense of the luminous and endless. He provides the boundaries, trued and faired, against expectation. The rich and variegated color areas are vibratory conversations, they establish their own language, yet unhermetic, approachable, and they invite the viewer to partake of their buoyant, often jubilant declamations.”

Something of this can be seen in the reproduction here of “Green Broom”(2012), with its upstanding, sparkling raffish whites with their internal diagrams, surrounded by dulcet fields of green.
View More