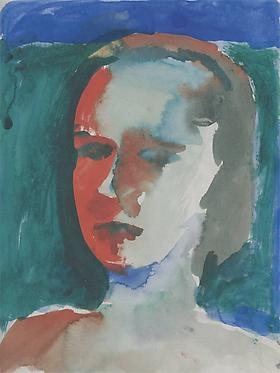 The artistic mastery of internationally revered artist Richard Diebenkorn will be presented in a premier exhibit at the College of Marin Fine Arts Gallery beginning Monday, September 30, 2013. The show is open to the public free of charge.

The seven-week exhibit features 40 pieces, 38 of which have never been publicly viewed. The selected works on paper portray a richly intimate glimpse into the artist’s evolution spanning more than 40 years.

“College of Marin is extremely fortunate to host the world premier of this exhibit,” said Dr. David Wain Coon, superintendent/president of College of Marin. “The exhibit will be the highlight of the college’s fall 2013 fine arts curriculum allowing students and community members the opportunity to study up close the development of an internationally acclaimed artist. ”

The show, which includes pencil and ink drawings on paper, collages of torn paper and watercolors, is the first show to be produced by the Diebenkorn Foundation.

The College of Marin exhibit includes lesser known works and others that are “knockouts,” said Andrea Liguori, managing director of the Richard Diebenkorn Foundation. Liguori is also director of research and associate editor of the Richard Diebenkorn Catalogue Raisonné. “This is a body of work that should be seen. It represents the process of an artist in a very private way. Everything is small enough that the viewer will want to walk right up to the drawing and see it closely before stepping back. It needs a space like the new College of Marin gallery, well-lit, clean and simple.”

The Diebenkorn Foundation provided a $20,000 grant to provide frames and packaging for the exhibit. College of Marin hopes to raise matching funds to pay for additional costs related to the staging of such a prestigious exhibit.

“We are very grateful to the Diebenkorn Foundation for their gift in making this show possible,” said Dr. Coon. “It is our hope that individuals who value the arts in our community will be inspired to sponsor this extraordinary exhibit.”

Chester Arnold, chair of the Fine Arts Department at College of Marin, a painting instructor and artist, curated the exhibit. He sifted through hundreds of drawings, many of which were unframed in flat files in storage at the Foundation. Some of them were created in lean times for the artist on the back of old advertising posters for Mother’s Cookies and Pennzoil.

“These works have a special import to anyone studying art,” Arnold said. “They are small sketches, remarkable and beautiful. They reveal so much about his personality and the works that were being born in his studio. Each period of his work Ocean Park, Berkeley, Healdsburg -- all had highlights along the way and you can see them happening. It is an exhilarating study depicting the development of an artist.”

For the Berkeley, California based Diebenkorn Foundation, founded in 2009, this first exhibit embraces the educational mission of the organization. Not only was Diebenkorn a life-long educator, but also the family has special ties to people at College of Marin.

“I think Diebenkorn would have appreciated the way Chester conceived of this show, giving students the chance to view and discuss this work with their colleagues in their own exhibition space,” Liguori said. “It will encourage students to look at their own process as artists, to ask questions and develop themselves further. I think the show will surprise and delight people.”

Phyllis Diebenkorn, the artist’s wife, is enthusiastic about the selection of drawings, said Richard Grant, executive director of the Foundation. Grant is the son-in-law of Diebenkorn. “These are not the big blockbuster pieces or the very familiar and popular works. These show the artist’s technique. He believed very strongly that if you want to be an artist, you needed to study what comes before you.”

Chris West, College of Marin drawing instructor, artist and the new director of the College of Marin Gallery, describes the exhibit as akin to “pulling back the curtain on a developing master. It provides an intimacy that will empower students.

“Here you have this paragon of the art world and you get to see the process,” West said. “He’s using the same materials that our beginning students use. He’s using pen and ink. He’s using graphite. He’s using newsprint. In some ways it demystifies it. It becomes clear.”

Much of the work and more unseen pieces were published for the first time in two new books released this month by publisher Kelly’s Cove Press in Berkeley, CA. From The Model and Abstractions on Paper were released June 3 in connection with the College of Marin show. The de Young Museum in San Francisco is also hosting a completely different show– Richard Diebenkorn: The Berkeley Years, 1953-1966, opening June 22 and closing Sept. 29, 2013.

“People might think that works of paper are slight but when folks see how much has gone into so many of these pieces, they will see not only how fluent he is, but how imaginative he is in looking at the figure,” said Bart Schneider, Kelly’s Cove Press publisher. “The virtuousity is stunning, some of what did he do with a single line... It is so much craft and instinct developed over a career.”

After leaving College of Marin, the exhibit will travel on to four other educationally oriented galleries in the U.S.: the Natalie & James Thompson Gallery at San Jose State University, San Jose, Calif., April 15 – May 17, 2014; the Katzen Arts Center at American University in Washington, D.C., Nov. 8 – Dec. 14, 2014; the Sonoma Valley Museum of Art in Sonoma, Calif., June 6 – Aug