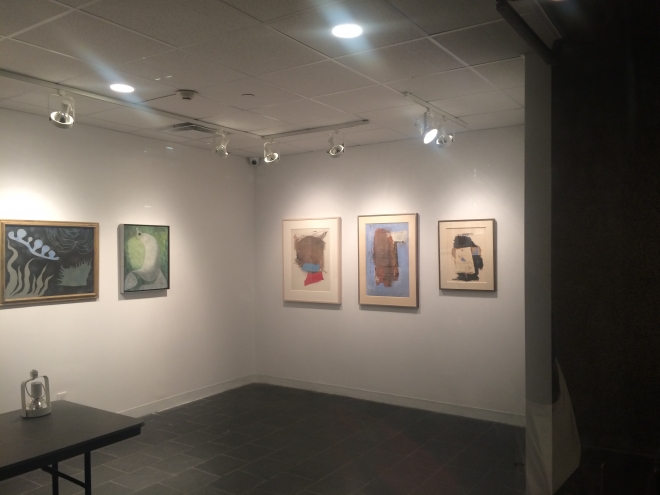 THE BERTHA AND KARL LEUBSDORF ART GALLERY (Entrance on 68th St. between Park and Lexington Ave.)

THE EXHIBITION
Robert Motherwell recounts that in 1951, Edna Wells Luetz, the newly appointed Chair of Hunter’s Department of Art, reached out to the Museum of Modern Art’s founding curator, Alfred Barr, in search of “a modern artist, and one who is articulate.” This marked the beginning of Hunter College’s commitment to artists as teachers, and to hiring artists fully engaged in the questions of the art of their time.  Barr recommended Motherwell, and at Motherwell’s urging, Luetz would bring to Hunter a number of artists associated with the New York School. The artists included in this exhibition are William Baziotes, Fritz Bultman, Richard Lippold, Ray Parker, and George Sugarman. This remarkable cohort defined the fundamental aesthetic and professional ambitions of Hunter’s art department, and affirmed its commitment to creative practice.

In addition to a selection of works by Motherwell and the artists he brought to Hunter College, the exhibition will offer a collection of archival materials to make the case for the aesthetic and intellectual remaking of Hunter’s Art Department.  His syllabi and lecture notes and those of others, particularly Baziotes, whom Luetz hired on Motherwell’s recommendation in 1952, document a new thrust in teaching, one that situated the problems of the modern artist at the center of a young artist’s education. Among other archival materials the exhibition will include is an unpublished statement Motherwell drafted in the mid-1950s, entitled “The Aim of the Art Department at Hunter College.”

This unique exhibition documents Motherwell’s role in permanently transforming Hunter’s Department of Art and Art History through the dedicated modern painters and sculptors he brought to the faculty. Through the works of Motherwell and his colleagues, as well as the archival materials assembled here, the exhibition makes clear how intricately woven the history of Hunter’s art department is through the story of modern art in New York.

This exhibition is organized by Howard Singerman, Phyllis and Joseph Caroff Chair, Department of Art and Art History, Hunter College with Sarah Watson, Acting Director and Curator, Hunter College Art Galleries and Annie Wischmeyer, Assistant Curator, and will be accompanied by an illustrated catalogue featuring an essay by Howard Singerman. Additional curatorial assistance has been provided by Jocelyn Spaar, Assistant to the Director, and Irini Zervas, Graduate Fellow.

Robert Motherwell and the New York School at Hunter is made possible with the generous support of the Dedalus Foundation.