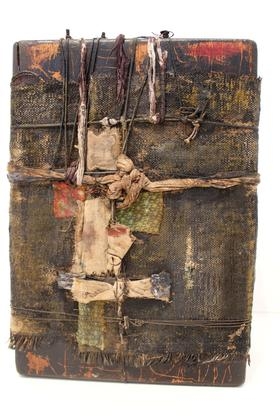 You call it collecting. I call it hoarding. The New Museum calls it art and has a captivating exhibition devoted to it. Titled “The Keeper,” the show fills three floors and a lobby gallery with hundreds of thousands of mostly small objects and images gathered, sorted, arranged and recorded by some 30 retentive artists — keepers — over the course of the 20th century and into the 21st.

Some of these things are custom-made, others found. Often small items fuse to create larger ones, or installations, which are all, potentially, still growing. Generally speaking, the line between controlled selection and untrammeled accretion is tenuous, as is any clear distinction between connoisseurship and pathology.

What is it with the relationship between people and things, anyway — this human drive to have more and more? Collecting can, of course, be practical: Libraries and museums are valuable utilities. Ego, personal and political, is a familiar motivator: I own much, therefore I am much. So is inertia: In a global capitalist culture, excess stuff arrives all but unbidden and then proves almost impossible to unload.

The real point of collecting, though, may lie beyond practicality, or desire, or accident. People surround themselves with things to compensate for perceived deprivation past, and as a hedge against fear of future want. They encase themselves in environments that will magnify their view of themselves in the world or protectively narrow it, and, either way, keep thoughts of dissolution at bay.

The accumulative impulse in the show — organized by Massimiliano Gioni, the New Museum’s artistic director; Margot Norton, an associate curator; and Natalie Bell and Helga Christoffersen, assistant curators — takes varied forms. It can be scientific in spirit. Such is the case with a set of butterfly studies, collaged and annotated by the novelist Vladimir Nabokov in his alter ego as a lepidopterist, and in postcard-size paintings of apples by Korbinian Aigner (1885-1966), a Roman Catholic priest in Germany who pursued an interest in fruit cultivation even when imprisoned at Dachau for speaking out against the Nazi regime.

Wilson Bentley (1865-1931), an American farmer with an inventor’s instincts, spent his life in the town of Jericho, Vt. There, during deep-freeze winters, he created a microscopic technique for photographing snowflakes. After taking some 5,000 pictures, he could assert with confidence that no two snow crystals are alike. The Wisconsin whittler Levi Fisher Ames (1843-1923) might have said the same of the creatures in his miniature wood-carved zoo. His bears, pigs and whales were common enough. But his “Ring Tailed Doodle Sockdologer” and his “Famous Michigan Mermaid. Half Elephant and Half Sturgeon” were singular beings, and collectible for that reason alone.

Artists with sociological interests also produced voluminous archives of visual data. In 1978, at 67, the Ukraine-born photographer Zofia Rydet set out to document every household in Poland, where she lived. Although by the time of her death, in 1997, she hadn’t reached her goal, she had made an impressive start, shooting the interiors of 20,000 rural homes. Most, however poor, were packed to the roof with things, their walls plastered with images of pop stars and Christian saints.

Documenting — which is a version of collecting — existing collections like these constitutes a genre of its own in the show. In a 2013 video called “The Trick Brain,” the contemporary British artist Ed Atkins adds terrifically creepy spoken commentary to an old film tour of the personal art collection amassed by the French Surrealist André Breton. Beginning in 2005, the Swiss photographer Mario Del Curto began to photograph the astonishing architectural structures by the Canadian artist Richard Greaves on a patch of woodland in southern Quebec, each an immense assemblage of discarded matter held together by wire, and all now destroyed.

And in 1993, the Austrian artist Oliver Croy and the critic Oliver Elser rescued almost 400 tabletop-scale models of imaginary Swiss buildings from junk shop oblivion. They were all made from cardboard, matchboxes and magazine tear sheets, by one Peter Fritz (1916-1992), an insurance clerk from Vienna about whom nothing further is known. A sampling of the Fritz collection — or is it the Croy and Elser collection? The show deliberately confuses the roles of collectors and artists — is at the New Museum. A group was also included in the main exhibition of the 2013 Venice Biennale, “The Encyclopedic Palace,” organized by Mr. Gioni. Approximately a third of the participants in “The Keeper” were also in that Venice show.

The Danish artist Henrik Oleson was, too, though he’s at the New Museum with different work, his 2007 survey piece called “Some Gay-Lesbian Artists and/or Artists relevant to Homo-Social Culture Born between c. 1300-1870.” A maze of funky digital prints attached to panels, it approaches art history through a queer eye, dividing it taxonomically by such categories as “The Appearance of Sodomites in Visual Culture,” “Female Societies, Amazons, Myths” and “Some Faggy Gestures.” It’s no-such-thing-as-too-much-information brilliant.

It’s also quite personal, as the most absorbing work in the show is. Some of it has a reliquary air. Howard Fried, a California-based Conceptualist, exhibits the wardrobe of his mother, who died in 2002. The dark, fetid-looking assemblages of the reclusive Hannelore Baron (1926-1987) were made in the security of her Riverdale, Bronx, home but are saturated with a sense of panicked fatalism instilled by the Holocaust, which she had narrowly escaped.

That event is the subject of the show’s single most piercing entry: reproductions of pocket-size pencil drawings, probably dating from 1943, that are eyewitness depictions of the daily horrors of life inside Auschwitz, as recorded by an artist who signed the pictures MM. (The original sheets, found stuffed in a bottle, are in the collection of the Auschwitz-Birkenau State Museum.)

What emotions propelled that artist’s hand? Fury? Despair? A spirit-focusing, nerve-steadying desire to deliver truth to history? We can’t know. Spiritual love was the force behind the work of the Swedish mystic Hilma af Klint (1862-1944), whose 16 paintings here are the largest number I’ve ever seen in New York, and are alone worth a visit. Her mind was on history, too. She asked that her paintings be hidden away for 20 years after her death, by which time, she hoped, a new age would have the eyes for them. It did.

But if she had not lived a middle-class life and been academically trained, would her paintings now be slotted as “outsider art” rather than classic early Modern abstraction? As it is, the outsider label hovers uncertainly over the Berlin artist Vanda Vieira-Schmidt, who turns out streams of abstract drawings, sometimes hundreds a day — 300,000 are stacked in a gallery here — in the belief that they prevent evil from destroying the world.

And the label falls squarely on the career of Arthur Bispo do Rosário (circa 1910-89), a Brazilian artist who, after reporting that he’d had a visit from Christ and some angels, was committed to an asylum where, using unraveled clothing and rubbish, he created tapestries, arklike ships and a line of celestial formal wear, all on view in the museum’s lobby gallery.

Yet art isn’t outsider just because it looks that way. If that were true, the market would have long ago jumped on Shinro Ohtake, a highly regarded Tokyo noise-rock musician, who has for decades been compiling cut-and-paste scrapbooks that suggest bulging, eruptive crosses between Rauschenberg “combines” and Warhol “time capsules.”

Yuji Agematsu, his contemporary, would be a big outsider name, too. A New York City resident since 1980, he sifts bits of organic matter from the streets — cigarette butts, chewed gum, pins — and encloses them in tiny cellophane wrappers. The results, which resemble mini-terrariums or museum vitrines, do the heroic job of preserving a culture’s base matter but are as portable and personal as talismans.

As to the view of art’s being essentially talismanic, there’s a museum-within-the-museum devoted to the idea here, in the form of an installation called “Partners (the Teddy Bear Project)” by the German artist Ydessa Hendeles. Designed as an insanely neat, claustrophobically dense ethnological display on two levels, it holds some 3,000 framed photographs, many from early-20th-century family albums, of people and teddy bears posed together, and a few vintage examples of the real thing.

The teddy bear was introduced to America around 1902 — Germany also lays claim to inventing it — as a homage to President Theodore Roosevelt and quickly assumed an independent pop-cultural life. Ms. Hendeles, multitasking as artist, curator and collector, has arranged her pictures in units of classification to illustrate some of the toy’s social uses: political mascot, emblem of class status, embodiment of commercial success, protector of childhood innocence, adult comforter in a harsh universe. (Ms. Hendeles is a child of Holocaust survivors who lost everything in World War II.)

As an object, single or multiplied, it serves the basic function that collecting — call it hoarding, call it installation art — does. It lets us keep the illusion that we can forever embrace, and be embraced by, what is forever fading away.